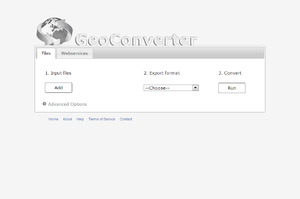 GeoConverter is a static ('1:1') geospatial file data format converter and coordinate transformer. It is running as a webapplication and designed to be used by technical users who casually have to convert GIS and GPS data.

GeoConverter is based on the OGR open source library, especially on the OGR2OGR commandline tool as documented in the OGR pages.

It's possible that in the future GeoConverter get's an additional machine-machine interface and this would be a typical Web Processing Service (WPS).

Look also at alternatives to GeoConverter like these Online Geoconverters:

For large datasets pls. install the OGR command line tool locally, and follow the tricks here at OGR. OGR can be installed as part of GDAL or as part of QGIS.

This section explains the rules for uploading files to GeoConverter as well as important notes:

These are Frequently Asked Questions (FAQ) for the GeoConverter documentation Wiki.

What to do when conversion fails in general?
Scan these FAQs (:->); Read the chapter "Rules for uploading files" above. Try to upload one of the example files given below.

What to do when SHP conversion fails?
Make sure you provide an accompanying .DBF and .SHX files and make a ZIP file with all three. If you also include a .PRJ file, then GeoConverter will get the source CRS from the "PROJCS" field, if available.

What to do when converting to KML fails?
See the rules regarding CRS above saying that you always have to provide source the CRS no. (to whatever CRS the source has) and to set target the CRS to 4326.

What to do when converting from KML to some other format fails?
First, the KML input parser is - like many parsers - sensitive to encoding. Ensure, it's UTF-8. Second, the KML parser can processes only geometry, title and one additional attribute - by default 'description' - from the KML source. Last, see the rules regarding CRS above.

What to do when converting to KML succeeds but Google Earth displays nothing?
First, KML is an XML dialect so check the question about GML and GPX above. Second, KML assumes the GPS coordinate system WGS84. So check if you have filled in both numbers in the fields "Source EPSG no.:" and "Target EPSG no.:". Search for these EPSG numbers in spatialreference.org.

What to do when MIF conversion fails?
Make sure you provide an accompanying .MID file and make a ZIP file with both.

GML or GPX fail to convert, what to do?
These formats are XML file formats. XML is a human readable ASCII format with a very rigid structure and encoding. There are readers which validate the input and even complain about the character encoding. Often when there is an encoding called 'UTF-8' but the file comes as Windows 'ANSI'; so you have to look for an editor or a tool which writes a proper UTF-8 encoded file.

What to do in general when the conversion fails?

Where can one submit bugs and feature requests?
Here at the bottom of the Wiki discussion page.

What to do when INTERLIS conversion fails?
Make sure that both files, ili and itf, have the same base file name. And INTERLIS 2 is still not fully tested.

How do I create an INTERLIS model file (.ili) when converting to INTERLIS?
That's a feature missing in OGR. First, you have tobe aware that OGR is a 1:1 converter. And the INTERLIS format requires that any data file is accompanied with a model file (.ili). This applies also when writing to Interlis format. Currently, you have to guess the structure of the source format (see e.g. Shapefile attributes) and write an INTERLIS model file by hand using a text editor.

These formats are supported for reading only:

What is a layer and a dataset?
An OGR feature object encapsulates the values of a whole feature, that is a geometry and a set of attributes. A layer object is a collection of features (objects) of the same feature class. A data source represents a file or a database containing one or more layer objects. Note that 'layer' definition and 'feature class' definition are essentially the same. Layers have a reference to a spatial coordinate reference system (CRS). See also OGR for an explanation in german.

I see GPX but can't find any other GPS file formats?
GPS file formats like NMEA or Garmin (.gdb) are converted best through existing software. See GPS-Software for more information about this topic.

I miss DXF and other CAD file formats?
Microstation's DGN (up to version 7) is supported by OGR but not implemeted yet in GeoConverter. DXF unfortunately does not yet exist as a suitable driver for OGR altough some free libraries exist - so, sponsors are welcome!

Why do I have to register before using this service? What are you doing with my personal information like my e-mail?
We ask for your e-mail and name mainly because of the tedious fight against spam! As a side effect you become part of the GISpunkt HSR community where we send information mails sometimes. These mails are currently sent every other month and will never exceed once a week. Your e-mail will never be used for other purposes whatsoever and we will never give away your personal data.

Is GeoConverter a competitor to other converter software?
There are quite some professional products around like FME, igtools or InterlisStudio. These products offer more than a straight forward and static 1:1 conversion. They can be manually configured and often support more file formats. So: No! GeoConverter is not meant as a competition but as an enabler of GIS and geospatial data!

Who runs this webapplication?
This user service is brought to you by GISpunkt HSR. It is an experimental project without any warranty.

What are the Terms of Service of the GeoConverter?
See here.

Can these conversions also be run on a local PC?
Yes, if you can install some software on your PC: We use OGR2OGR which is delivered among others as FWTools and you can run most conversions locally as it was designed for initially. See OGR for more information about this.

Why does .MIF/.MID fail to convert?
The file extensions need to be lowercase: .mif/.mid.

GeoConverter uses the 'Comma Separated Values' (CSV) reader/writer from OGR. The OGR CSV reader/writer allows to encode geometry by using WKT as attribute values. Unfortunately, CSV leaves many decisions open and most annoying is that the (german) MS Excel is a non-conformant CSV writer. When trying to upload CSV from MS Excel some re-formatting is needed before hand (see ATTENTION), e.g. replacing semi-colons with colons, removing double quotes etc.

These are the rules in order to successfully upload CSV file with geometry:

Get your sample files by clicking to the links below. The data is about Swiss train stations and its of geometry type POINT (see WKT).

Do you have any feature requests, bug reports and suggestions? We appreciate every feedback!

Please go to the "discussion" ("Diskussion") tab of this Wiki page and put it there by adding (+) your feedback on the bottom.

Liability
We exclude any liability. There is no responsibility on the data converted nor on the content of the linked websites.

Terms of use
This is a free service. Any commercial re-use of this service is not allowed. No unlimited access is ensured. The site operators reserve expressly to change or delete the content without prior notice.

Privacy Policy
The protection of privacy and data protection are important to us. Data will be kept strictly confidential and not sold or shared. There is no personal data involved (log files) except for the voluntary registration.

Copyright
A re-use of graphics and information through publications or web pages is only Citing a source reference "GISpunkt HSR www.gis.hsr.ch" admissible.